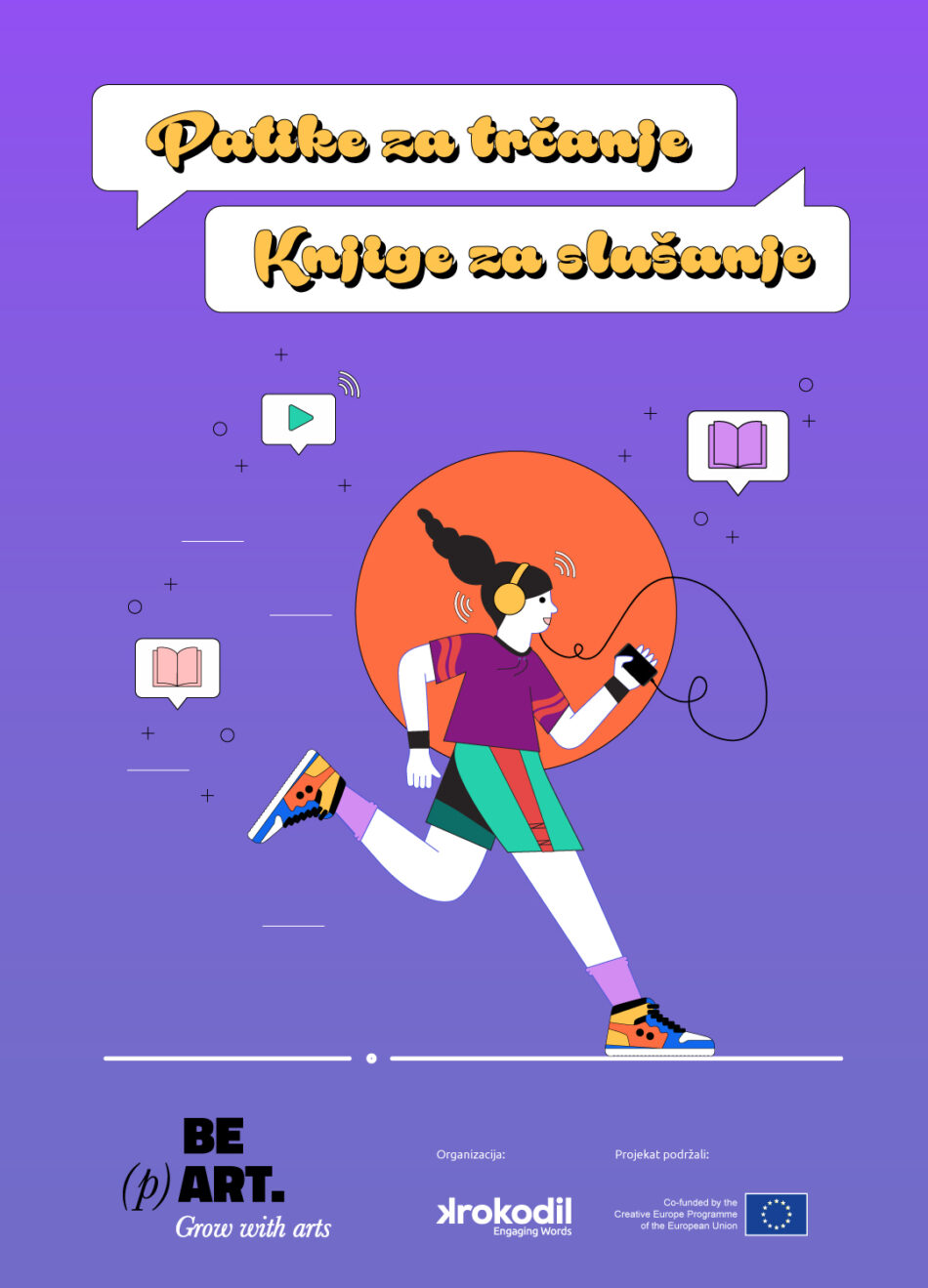 Association KROKODIL’s  newest project, AUDIO MARATHON – Reading while Running is a part of the European project BE (P)ART GROW WITH ARTS, which is organized as a partnered venture between Spain, Belgium and Hungary: PEN Català, UC Limburg, Szepirok Tarsasaga Egyesuleteuc and Fundación Uxio Novoneyra. The focus of this three-year project’s activities is to make literature more appealing to young people, primarily due to its key role in helping to understand the world and developing critical thinking and creative problem solving skills, as well as the positive influence of reading and physical activity on mental health.

With  this in mind,  our project in Serbia will introduce the practice of listening to  audiobooks while  recreational running and promote the synergetic effect of reading, that is the positive effect of listening to books and physical activity on physical and mental health. The goal is to create interest among  sports enthusiasts  for the world of literature, so that they can enrich their training with audio books,  as well as introduce the benefits of physical activity to young writers and literature lovers. Many well-known writers, who are recreational runners, such as Haruki Murakami, Ante Tomić, Srećko Horvat, Vladimir Arsenijević, and Nebojša Vujanović, to name a few, have witnessed  the relationship between these two areas.

InNovember 2020, we will organize a survey  in the form of a focus group and questionnaire to establish a consensus concerning  the dominant lifestyles of our target group. We will talk to active recreational runners  about if, what, how and when they read; and with young people engaged in culture, If, how often and in what way they engage in physical activity. The results of this study  will serve us in the later  stages of the project.

During 2021, ten young people will participate in KROKODIL’s running-literary club, which will connect running, audio books and narration. The participants will receive a detailed running plan in order to prepare for the Belgrade marathon, and a team of sports experts and nutritionists  will follow their progress. During their three-month training period, the runners will listen to audio books, which they will discuss two times a month as part of  a literary book club.

At the 13th KROKODIL festival’s Running and wellbeing stand, experts in fields of literature, physical education as well as psychology will debate the importance of running and literature on physical and mental health, as well as the relationship between physical and intellectual activities. The participants of the project’s first year will also share their experiences in this venue.

During 2022, six aspiring writers will also participate in a mentorship program alongside their preparations for the Belgrade marathon. During their training, they will listen to audiobooks, as well as participate in workshops led  by professionals in the areas of literature and psychology. During that year, the runner-writers will write thematic texts about their experience preparing for the marathon. The texts will be presented within the accompanying program of the 14th KROKODIL festival.

Within the rich programming of the AUDIO MARATHON – Reading while Running project, we will also organize educational workshops and lectures for teachers and professors in primary schools and high schools, in order to impart  the latest and best world practices in education and in introducing the young to active and healthy lifestyles.

The project is co-financed by the Creative Europe program of the European Commission. Implementation partners: RUNNING and Serbian association for recreation and fitness.

You have just been sent an e-mail. Click on it in order your subscription to be validated.